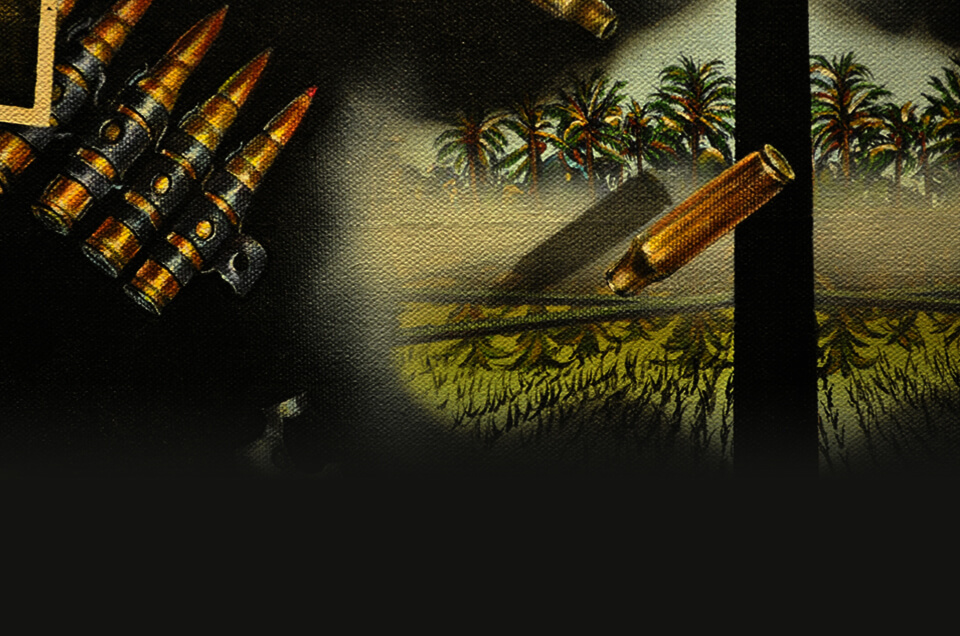 The Veterans were the Casualties of the Vietnam War;
The Families were the Prisoners of it.

The Story Behind the Painting

I left Vietnam 45 years ago…but it has not left me. My perceptions and to a much greater degree, the experiences of the other 2.5 million young Americans, served to shape and define our generation as we began to trickle back to the US homeland so long ago…extracted from hot, hostile killing zones and then deposited into the mostly uncaring bosom of America, whose pronounced cleavage separated the hawk and the dove..both perky at times. Coming home was the culmination of events that had so dramatically changed us and it established an unique brotherhood that would forever set us apart from the rest of the population.

As I got on with my postwar life and stumbled into an art career, thoughts of my 13 months as a Marine in South Vietnam were really never far away….and I was eventually inspired to weave a narrative on canvas about those times….not as a combat artist would, but uniquely, as perhaps, a photojournalist would.

“Vietnam Elegy” began on 23 November 2011 and was completed on 20 February 2014. The tools of this 43″ x 54″ creation have been paint, brush, collaged mementoes, renderings of artifacts and war relics (like me) in order to provide a general sense of the mood and the realities of the Vietnam War era, as well as to take a look at the attitude and events that typified the happenings back in “the world.” But the playing field that supports the imagery of this work is one of shuddering fireballs and humid, distant tropical tree lines…even tearing apart the canvas as a symbol of a polarized America in the Sixties. Each of the individual components of this visual travelogue, both the hand-painted elements and the paper-collaged items provide their own historical precedent to our time in the war zone…and they each have an individual story to tell.

“Vietnam Elegy” is being created in honor of the veterans and their families…and I pray that it might possess cathartic qualities that reinforce what the passage of time has done to bring peace to the past. The original painting has been officially donated. Posters and prints of the entire image are also available.